As a counterpart to the French Maginot Line, the Reich government at the time commissioned the construction of the "Siegfried Line", popularly known as the "West Wall", in 1935.

The "Siegfried Line" stretched over 630 km from the Swiss border along the Rhine, the Saar and the Moselle through the Eifel to the Belgian and Dutch borders and served to defend the western border of the Reich. More than 18,000 bunkers, tunnels and defense systems were built at that time, of which countless are still preserved today, but the majority have been left to decay due to the "ravages of time".

In the area of the former municipality of Konz alone there were around 25 of these bunkers, some of which were given strange nicknames by the population. The bunker in today's Granastraße, in the backyard of house no. 25, which has since been restored, was called "Villa Gartenlaube". The neighboring bunker, which was also preserved but not accessible, was the "Saar-Mosel-Klause" and the no longer preserved B-Werk on the Saarbrücke was popularly known as the "Filzlaus".

The "Villa Gartenlaube" was an absolutely special construction and was built in 1937 as part of the pioneer program in expansion stage B1 (B1 = 1.00 m wall thickness and 80 cm concrete ceiling) and consisted of 4 rooms: gas lock, crew room for 5 soldiers, one ammunition room and an attached combat room. The fighting room was rendered unusable in 1945 after the liberation by the Americans - by blasting out the ceiling and the 7P7 notch plate - and in 1963 the remaining remains of the fighting room were finally removed. With the exception of the "Villa Gartenlaube" and the neighboring "Saar-Mosel-Klause" all the bunkers in Konz were blown up and, at best, are only preserved as ruins.

In the 1950s and 1960s, the "Villa Gartenlaube" was used by the residents as a wood store for the wood stoves that were common at the time. With the switch to the more modern heating with oil, the bunker lost its importance as a deposit and fell more and more into oblivion. By planting trees and ivy on the bunker walls, the "eyesore" on the property was retouched. In the adjoining building in front of the bunker, a workshop was built in the 1970s and a canopy was built to protect heavy machinery from the entrance to the bunker. As a result, the "Villa Gartenlaube" was completely forgotten. Since the door was completely rusted in the meantime and could no longer be opened, it was sealed with concrete in the 1990s after the machine was dismantled.

In 2012, Sascha Berweiler rediscovered the neglected but still well-preserved Westwall bunker and decided to restore the bunker and open it to the public as a museum and memorial. After the ownership situation had been clarified, he was able to purchase the bunker from the Federal Agency for Real Estate Tasks after a long back and forth.

In May 2014 the time had come: Work on the "Villa Gazebo" could begin. Together with friends, the first thing to do was to uncover the system. The trees, which had meanwhile reached a height of 15 m, had to be felled and the ceiling uncovered. After the official handover by the Federal Agency for Real Estate Tasks in June 2014, the cleaning up work on the inside could begin. Within a period of almost 4 weeks, 420 kg of rubbish, 1,100 kg of contaminated wood, 2,300 kg of iron and steel and around 10.2 t of rubble were removed from the "Villa Gazebo" and disposed of properly. Now the restoration work could finally begin.

In countless hours and with great attention to detail, Sascha Berweiler and his team have restored the "Villa Gartenlaube" - as far as possible - true to the original and are now looking forward to the official opening, which will take place on May 8th, 2015 on the occasion of the 70th anniversary of the end of the war. (Entrance via the backyard) 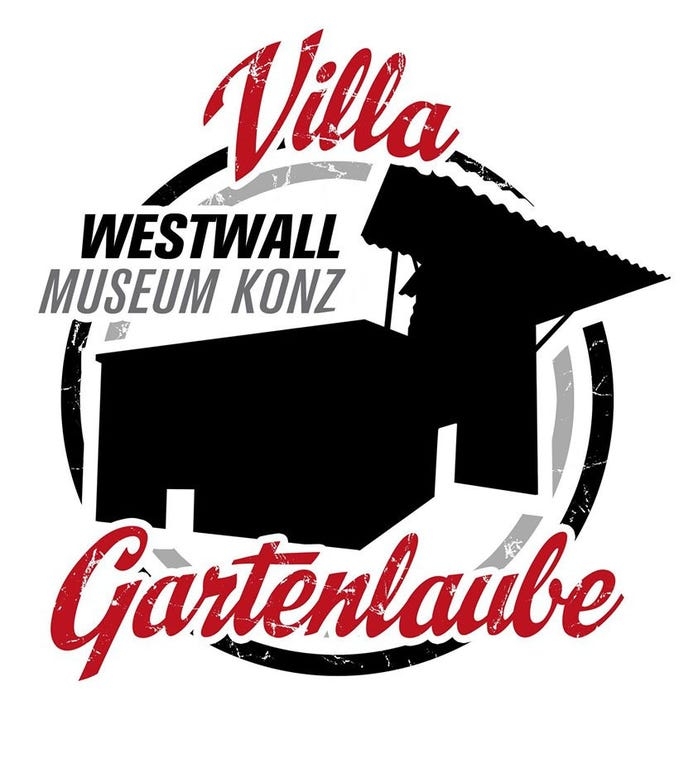